‘Sweeney’ – the result of a series of serendipitous events 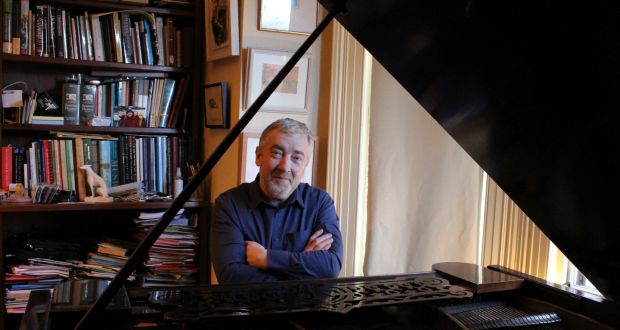 The following is an article that appeared in the Irish Times on Thursday, March 15, 2018:

‘I was always mindful that this is a song cycle,’ says composer Neil Martin of adapting Seamus Heaney’s poem ‘Sweeney’s Astray’ for song

The mythical 7th-century tale of a wandering bird man, suffering from what might now be diagnosed as post-traumatic stress disorder, is the source of inspiration behind Neil Martin’s newly commissioned song cycle, Sweeney. A highlight of this year’s St Patrick’s Festival, the work is inspired by Sweeney Astray, Seamus Heaney’s 1983 translation of the Irish myth, Buile Shuibhne.

Martin is a Belfast composer, cellist and piper who has long straddled the worlds of classical and traditional music. A garrulous character, he’s equally at home composing for the RTÉ Concert Orchestra as he is for his beloved West Ocean String Quartet.

Sweeney is the result of a series of serendipitous events, fuelled by a commission from RTÉ, to set songs in Irish on the occasion of our national feast day. Neil had been tossing some ideas around with Cúl Aodha singer Iarla Ó Lionáird for some time. The pair were intent on collaborating once the right opportunity presented itself. Timing was everything: Iarla had been reading Sweeney Astray. The pair considered it, and before long, they were off.

With the blessing of Marie Heaney, Martin holed himself up in the Tyrone Guthrie Centre in Annaghmakerrig, and set about the unenviable task of editing Heaney’s text.

“There was something so absolutely beautiful about Heaney’s English”, Martin recounts of a process that was equal parts pleasure and intimidation. “Imagine: me editing Seamus Heaney? I spent at least a month editing the text until I got a story I was happy with. I was determined that I needed to know the story before I would begin setting it to music. I had to be extremely respectful of Seamus’s text, because it’s so glorious, because he was a friend and because the family had entrusted so much in me in going about it.”

The length and complexity of Sweeney’s story meant that Martin needed a narrator to propel the story forward. That’s when Stephen Rea entered the fray, along with conductor David Brophy.

Martin knew that the easiest thing would have been to write a lot of sean nós songs for Iarla Ó Lionáird, whose voice is the fulcrum of the whole piece. Such an approach would have limited the contrast that Martin knew this tale of Homeric proportions demanded.

“In setting about the orchestration, I was always mindful that this is a song cycle”, Neil says, “and the lead voice here is that of Iarla Ó Lionáird – and Stephen Rea as well – because his voice is very important too. The orchestration needed to be mindful and respectful and not pulling focus from the words.”

Confident in the knowledge that Ó Lionáird could readily inhabit that twilight world between the traditional and classical worlds, Martin was determined to capitalise on all the colour and shade within that voice. What emerged is a continuous song cycle of 55 minutes.

“I deliberately didn’t want any break to fracture the magic that I was hoping to create,” he explains. “My objective was to ensure that Sweeney’s internal and external journey should be one thought process.”

Sweeney’s premiere will be bookended by a performance of Martin’s choral symphony, Ossa, inspired by the 17th-century Flight of the Earls: two stories separated by a millennium. These two epic tales are not unconnected, Martin maintains.

“I think Sweeney is many things”, he offers. “He’s the poet, the artist, the troubled soul, always on the hoof. At the start of the story, he’s this mad, rabid king. Then he’s cursed and he becomes the bird man, doomed to spend the rest of his life flitting around Ireland, England and Scotland, crazed out of his head. But Sweeney repents for his sins at the end of his life. Sweeney: from pagan to Christian is the story. Likewise with Ossa, what happened with Hugh O’Neill has forever changed the course of Irish history. Had Hugh got to Spain, had Philip given him an army, the whole history of Ireland very likely would have been different. So two very pivotal moments in Irish history, separated by a millennium.”

Never a man to be tethered by notions of borders, whether of the musical or geopolitical kind, the serendipity of the timing of Sweeney isn’t lost on Martin either. To be premiering a work on the feast day of the nation’s saint, which speaks to the complexities of identity, is an honour, but one that doesn’t come without its share of worries.

“I’m very aware of all sorts of angles on this relating to Brexit, to Ireland, and to the Border,” Neil says. “One of the beautiful things for me is that Sweeney, the birdman sees no border. He flies above everything. There are no divisions in his life. I think that for me is the artistic impetus as well: no borders, you must have the open mind. That is central to the way I think about music as an art form. I’m aware that we’re on the cusp of something major in the history of this island and the island across the water. But it’s about our relationship with Europe too, and the rest of the world, because the Brexit decision has global implications. Music can surprise us in throwing those concepts into sharp relief.”